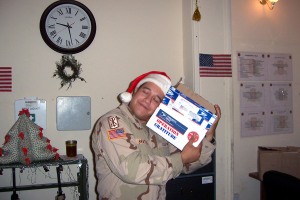 Before Operation Gratitude members could seal the 600,000 packages and send them to U.S. troops around the world for the holidays — a few Lake Havasu City residents had to lend a helping hand.

Community members, the American Veterans Traveling Tribute and the Lake Havasu Hospitality Association presented the group with a check for $35,000 and personal items for holiday packages. Operation Gratitude is a program that sends care packages to American troops deployed overseas. More than 2,000 volunteers gathered in Van Nuys, CA, to celebrate the wrapping of the 600,000th package.

Carolyn Blashek, who started Operation Gratitude in 2003, thanked Victory Motorcycles, a division of Polaris Industries, for their generous donation of a motorcycle, according to a press release. Keys for the motorcycle were placed in the 600,000th package.

“Operation Gratitude Care Packages are an expression of enormous respect and appreciation for those who voluntarily put themselves in harm’s way to protect our freedom,” Blashek said in the release.  “This exciting 600,000th package event represents a celebration of all the brave Americans who wear the uniform of our great nation.  We are honored to send this package to a young service member currently deployed in harm’s way, who represents all our courageous heroes – past, present and future – from all branches of the military.”