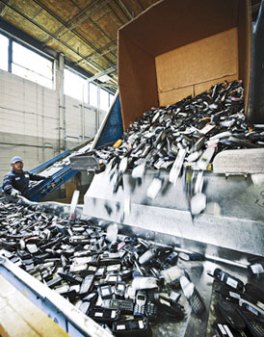 You probably already know you should recycle your old mobile phone, for a bunch of environmental reasons. But it’s not just keeping the toxic materials out of our groundwater, or conserving the rare earth metals that are expensive and energy-intensive to mine. It’s also cash money you’re storing in that cell phone graveyard in the back of your closet. Some phones can net you a few hundred bucks. Even older models can fetch $20 or so. Whether it’s an ancient Zack Morris behemoth or the latest iPhone, it’s worth something to someone and a slew of businesses are popping up trying to buy your mobile castoffs.

E-waste is one of the fastest growing forms of garbage in America. It’s become one of our biggest exports. And it’s nasty waste too. According to the EPA (Environmental Protection Agency) the United States made 3.19 million tons of e-waste in 2009. Only 17.7 percent of that was recycled.

So let’s start to fix it. It’s really a lot easier than you think. Since the average cell user gets a new handset every two years, phones are one of the most frequently tossed gadgets. “We want to change that by making cell phone recycling as quick and easy as possible,” says Jeremy Cohen, founder of ExchangeMyPhone. Phones are some of the easiest electronics to put back in circulation. “You can go on our site, get an instant price quote, request a postage paid envelope, and drop it in any U.S. post box on your way to work.” He even takes broken phones.

Cohen’s company is the latest addition to a growing industry. CellforCash and PaceButler have been doing this for a while now, with slightly different mail-in methods. Gazelle.com and YouRenew will take just about any gadget. There are in-store Eco ATMs that accept donations, big box chain store buy-backs, even programs that give the phones to soldiers, or use them to help African gorillas. There are so many options because these things have value! So don’t toss them.

Cohen’s family business is used books, but as paper looks more and more obsolete, he got this idea. “I have been involved in finding new homes for used items for as long as I can remember. I learned the benefits of re-use working at my father’s used book business in Chicago and I wanted to bring those same values to the recycling of used and broken phones.” But he’s not giving up books altogether. ExchangeMyPhone also donates a book for every phone you recycle. “It gives our customers the chance to be green and give back to their communities.”

If you really want to go the extra mile to reduce your e-waste, don’t just sell your old phone, buy a used one.

Want even more options than linked to above?  ReCellular has a longer list of cell phone recycling locations and programs.