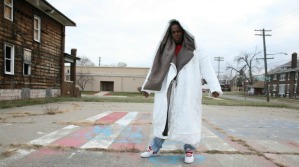 As a design student in Detroit, Veronika Scott was keenly aware of the increasing numbers of homeless people suffering deeply during the relentless winters. At the tender age of 21, she created The Detroit Empowerment Plan not to solve homelessness, but to provide much-needed warmth to the city’s 20,000 street dwellers.

‘This is my story about the humanitarian project called The Empowerment Plan. Meet the re-designed coat: Element S. It is self-heated, waterproof, and transforms into a sleeping bag at night. It is made by a group of homeless women who are paid minimum wage, fed and housed while creating these coats made for those living on the streets. The focus is on the humanitarian system to create jobs for those that desire them and coats for those that need them at no cost. The goal is to empower, employ, educate, and instill pride. The importance is not with the product but with the people.’

What inspired the empowerment plan was a school project. Veronika is a product design student at the College for Creative Studies. She was working in studio class and a humanitarian group came in to sponsor our studio and really became a catalyst. “They said to ‘design to fill a need’ and from there I realized that as a college student, I had ramen and a roof over my head, so my needs were being met. From there I reached out to the homeless community, which in Detroit has a pretty large number of people, an estimated 20,000 individuals living on the street. I spent three days a week, every week, for five months working in a homeless shelter downtown. The people there became an integral part of the entire design, they were there every step of the way and tested all four prototypes. When the semester ended the project did not; it couldn’t because I didn’t feel it was over. I continued the project not just because I was passionate about it but because actual people needed, wanted, and desired it. I realized I had to take it to the next level and make it a system.” 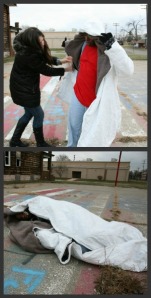