Keepers at Pocatello Zoo, Idaho, were worried when they noticed Shooter, a four-year-old elk, acting strangely at his water trough. Baffled, they watched as the animal, who is so massive some keepers are afraid to even enter his enclosure, tried to dip his hooves into his drinking trough, before attempting to dunk his whole head in the water. But they were amazed as 10ft tall Shooter lifted his head from the trough, clutching a tiny marmot between his jaws.

The gentle giant placed the hapless rodent down and nudged it with his hoof, as if checking it for signs of life, before calmly watching it scamper off into the bushes. Zoo staff caught the entire rescue on camera. ‘It really was amazing,’ said Kate O’Conner, Pocatello’s education co-ordinator. 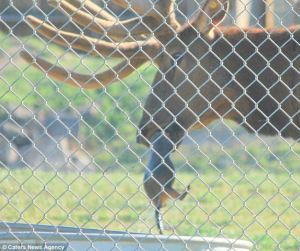