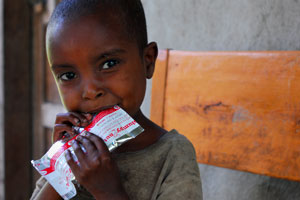 Some things DO change. Ethiopia has more than halved its child mortality rates since 1990 through campaigns to increase the number of health workers and clinics throughout the country, government and aid officials reported. The Horn of Africa nation has long suffered from one of the world’s highest death rates of children due to recurring droughts. Twenty years ago the mortality rate for those aged under five was about 20 percent. “Today, according to the 2011 Ethiopian Demographic and Health Survey, that figure has been slashed by more than half to 8.8 per cent,” said Keseteberhan Admassu, Ethiopia’s State Minister of Health. “Reducing malnutrition, which is an underlying factor in at least half of all under-five deaths, has had a profound impact on the survival rates of children,” he told a gathering of representatives of United Nations agencies.

Keseteberhan said the nation-wide malnutrition rate has been slashed by 32 percent, with prevalence to being underweight dropping to 28.7 percent in 2010 from 42.1 percent in 2000. The U.N. Children’s Fund (UNICEF) attributed the reductions to increased access to health posts in remote and drought-stricken areas, and a growing number of health workers. The number of health posts has surged to more than 9,000 in 2011 from a handful in 2004 with priority shifted towards food-insecure areas, UNICEF said. “The vigorous training of health extension workers who are on the frontline in the work to provide integrated health, nutrition, sanitation and hygiene services to rural communities … has paid off,” said Ted Chaiban, UNICEF’s representative to Ethiopia.

To find out more about UNICEF and how to help support these continued efforts, visit www.unicef.org.