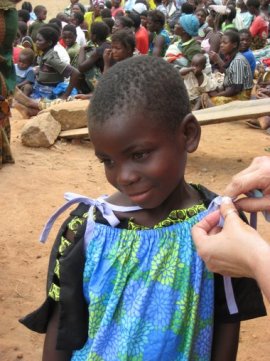 Rachel O’Neill is at home in Malawi. Her real home is in Trenton, MI, not far from Detroit. But when she arrives in Lilongwe, Malawi’s capital, she is welcomed like a native. On her most recent trip to the country last month, O’Neill was greeted at the airport by a handful of locals, people she has known and worked with for almost five years. Her visits are never routine, but this trip was special.

O’Neill was returning to Malawi on the five-year anniversary of her first trip to the country. It was Thanksgiving week in 2006 when she first made a commitment to sew and hand out dresses to a few thousand girls – five years ago, almost to the day, when she promised to do something small to bring smiles to the faces of girls who she knew held so much promise. O’Neill didn’t know it at the time, but her simple idea to help a few thousand girls would end up touching the lives of hundreds of thousands of women around the world. Since the first coverage of her story was aired on NBC Nightly News in December 2010, O’Neill has received more than 400,000 dresses from all 50 states. The dresses arrive on her home doorstep and she, along with a dedicated army of volunteers, makes sure they get to needy girls throughout Africa.

There’s no easy way to get to Lilongwe. Eighteen hours in flight and three connections to the capital city, then a two-and-a-half hour drive south to the countryside, picking up fuel when you can, because Malawi suffers from a fuel shortage. But when you get to the end of the dirt road that leads to the village, you know instantly why O’Neill makes the trip. Thobola is a simple town perched on a hill overlooking a green valley. Most people live in small, thatched-roof huts, pump their water from a well and only have basic nourishment. Still, despite their lack of traditional western resources, the kids’ smiles are radiant and their singing is contagious. They incorporate all the names of those who have come to visit into a song; the names of O’Neill’s family and friends.

It is a long, hot day in the unrelenting sunshine, but the girls are patient. It’s striking when O’Neill states that the dresses may be the only new things these girls have ever been given. The larger message only sinks in later. In a place like Thobola, a brand-new, handmade dress is not just a piece of clothing, it’s a symbol of hope and a gesture of friendship from women 8,000 miles away.