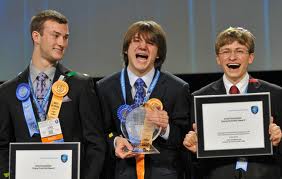 There has been a breakthrough in the fight against pancreatic cancer, and it’s all thanks to a 15-year-old teen and his mom, who drove him to Johns Hopkins University every night after school to test his theory in a lab. North County High School freshman Jack Andraka won what is considered the Olympics of science fairs with a diagnostic breakthrough in cancer treatment. The Crownsville 15-year-old won a $75,000 grand prize in this year’s Intel International Science and Engineering Fair for his new way to test for early-stage pancreatic cancer.

Andraka said the inspiration came from an uncle who died of the disease. He said the idea came to him in biology class. “That’s what’s really cool about science to me — you can affect other people’s lives. You can basically do anything with science,” the teen winner said. Based on the model of diabetic testing paper, Andraka created a dipstick sensor that tests blood or urine and detects pancreatic, ovarian and lung cancer. He said he did his work in the Johns Hopkins lab of Dr. Anirban Maitra, who said yes to Andraka after 200 other researchers had turned him down. “This is, without question, one of the most lethal malignancies known to mankind, and very, very few people who get it survive. So, when there is a 15-year-old who writes with that much passion about making an early-detection test for pancreatic cancer, there is no way you cannot hit the reply button,” Maitra told 11 News.

Andraka’s paper sensor boasts more than 90 percent accuracy and is 28 times faster, 28 times cheaper, and more than 100 times more sensitive than current tests for the disease, 11 News reporter Kate Amara said. “It can detect pancreatic cancer for about 3 cents in five minutes,” Andraka said. The teen’s mom said she raised her kids to be inquisitive and look for answers. “If they were curious about something, I wouldn’t answer their question. I’d say, ‘Find it out. Do an experiment. Test your hypothesis,'” Jane Andraka said.