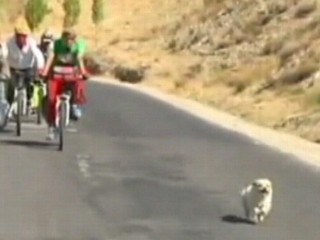 They say dogs are man’s best friend, and that certainly is the case with little stray pooch Xiao Sa, who liked man so much that she ran after a bunch of them cycling their way across China. The pup first took an interest in the pack of bikers after one fed her. As anyone who has fed a stray knows, that’s it. You’ve basically adopted it. But not one of the cyclists expected the small white and beige pup to keep up with them for over 1,000 miles of tough China terrain.

Astonished by the dog’s ability to run at least 37 miles a day and uphill over 10 mountains, the group named her Xiao Sa, or Little Sa, and began to blog about her. Others took to calling her “Forrest Gump.” The pooch also helped keep the biker’s spirit’s up during their trip. One participant said, “We did more than 40 miles uphill and at the end I had to get off and push my bike instead. But the dog ran ahead of me and stopped at a crossroads. She waited for a while, but got bored because I took so long, so ran back, put her paws on my calves, and started licking me. I could see she cared about me.”

Out of the thousands who began the race, only four finished. And one of them was a dog. Another finisher, 22-year-old Xiao Yong, is going to adopt the canine marathoner. There’s no doubt the pup will be able to keep up with whatever biking adventures Yong embarks on in the future.

What an amazing, little dog!