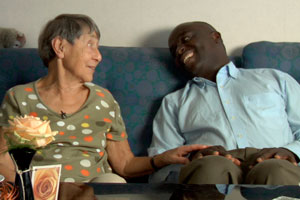 When we consider the vast number of people who need help, being part of the solution can seem overwhelming. There are hundreds of thousands of kids trapped in failing schools in the U.S. alone. There are many millions of starving children around the world. How can a single person who isn’t a billionaire have an impact? Where do you start?

Hilde Back’s story is about how small acts of kindness can have an unimaginably large impact. When she was a schoolteacher in Sweden, Hilde decided to sponsor one child’s education in Kenya. Hilde’s sponsorship of Chris Mburu cost about $15 per month. Most poor children in Kenya cannot afford to pay secondary school tuition. Unfortunately, without an education, an extremely difficult and impoverished life is practically guaranteed. Thanks to Hilde’s generosity, Chris avoided that fate.

Chris wound up graduating high school, going to University of Nairobi and then attending Harvard Law School. He became a U.N. Human Rights Advocate, and he started a charity. He petitioned the Swedish embassy to find the name of his anonymous sponsor. Then he named his nonprofit the Hilde Back Education Fund (HBEF) after the benefactor he never met. HBEF pays tuition for deserving poor students in Kenya. Since the charity’s start, 350 children have been supported. Three hundred and fifty lives have been changed directly . . . so far. That doesn’t even include the impact on their families. And who knows how many of these students will be inspired, as Chris was, to give back?

When talking about his background, Chris said, “I had very humble beginnings, growing up in a village that epitomized poverty, no paved roads, no electricity, no piped water, no medical facilities, and not much hope for a future. The school I went to did not have glass on its windows, none of us wore shoes, most families had to endure hard labor in the coffee plantations to get insignificant sums of money to buy necessities, and many children did not have enough to eat at home.”  And when talking about why he started HBEF to educate poor children, he said, “I think I want to see a world in which children have equal opportunity and are not robbed of their future by poverty, like so many of my friends in the village were.”

It’s interesting that the only reason Hilde Back was even alive to support Chris was because of a stranger’s kindness. Hilde was a Jewish child living in Germany during the Nazis’ reign. Both of her parents were killed in concentration camps, but a stranger helped her escape to Sweden. Hilde said that as a Jew, she wasn’t allowed to go to school in Germany. It seemed natural for her to sponsor schooling for someone who couldn’t otherwise attend.

This is all captured in an excellent documentary, A Small Act. The documentary follows Chris after he founded his charity. As we see in the film, Chris decides that he should meet Hilde and tell her about the nonprofit he named after her. Their meeting is emotional, and it’s very touching when he brings her to Kenya, and she is greeted like royalty and made an honorary tribal elder in his village. Not to mention that on her 85th birthday, Chris gives Hilde a sweatshirt that says “Harvard Mom.” This wonderful documentary is a reminder that we can all make a difference, and you never know how big an impact small acts of kindness can have.

Support the Hilde Back Education Fund.

Other ways to make a difference:

Volunteer Match has volunteer opportunities from over 83,000 nonprofits.

Kiva.org allows you to make microloans that help third world entrepreneurs become self-sufficient. An amazing 98.94% of the loans are repaid. You can lend $25 of a generous donor’s money through Kiva.org as a way to learn about the program.

Donors Choose connects you to classrooms in need, so you can make small donations to help schools with specific needs.

If you’re interested in third party reviews of charities you might support, check out Charity Navigator and GuideStar.

Source: http://www.bradaronson.com (This article was originally published by Brad Aronson on his blog which has inspirational stories for life and work.)