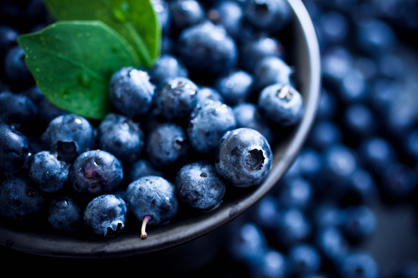 Everybody can use a protector now and then. For your brain, consider blueberries, spinach and a green algae, a trio of valiant knights disguised as food. Eating a daily dose of these three colorful plant foods can protect the brain from stroke damage by as much as 70 percent. When eaten regularly, they may also decrease the likelihood that a person will develop neurological disorders or age-related memory problems.

The powers of these foods lie in the pigment of their skins, which are packed with tiny health-promoting chemicals known as antioxidants. Antioxidants act as roving fighters in the brain, capturing cell-ravaging molecules known as free radicals. If left unchecked, free radicals cause nasty damage to the body’s cell membranes and DNA. Antioxidants consumed in brightly colored foods and deployed by the body mop up the free radicals before they can cause injury to cells.

An experiment over the course of one month showed just how protective these foods can be. Researchers from the National Institute on Drug Abuse replaced 2 percent of rat’s normal food with freeze-dried spinach, blueberries or spirulina powder. The researchers caused the animals to suffer a stroke, or a blood clot in the brain. Animals that ate the spirulina had 75 percent less brain damage compared to rats on a regular rat chow diet. The blueberry- and spinach-spiked diets resulted in 50 percent less brain damage in the rats.

Paula Bickford, a physician at James A. Haley Veteran Affairs hospital in Florida, says people can easily incorporate these foods into their diets and reap some of the same protection. Recipes in which foods are unheated are probably best, she says, as cooking blueberries and spinach can decrease their cell-protecting power. A crisp spinach salad or sweet blueberries right out of the crate are perfect, she says. Still eating blueberry pie or sautéed spinach are better than eating none at all.

Other studies show that other foods high in antioxidants—including cranberries and dark leafy greens—combat memory loss in Alzheimer’s disease patients. Still other foods have been found to protect the brain, heart and vascular system. Some of the most powerful foods are almonds and walnuts, brussels sprouts, broccoli, chocolate, olive oil, grape juice and red wine.

The studies are important, says Bickford, because they provide low-tech approaches to health prevention. The changes are ones you can make with relatively little effort, but that have the potential to yield great benefits later in life. To Bickford, it’s a pretty simple equation. “The foods we eat, the diet we choose, really do impact our health.”