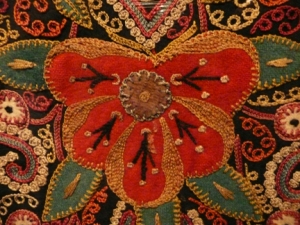 When the Pakistan Taliban’s campaign of terror arrived in the land formerly ruled by her late husband’s family, homemaker Mussarat Ahmedzeb decided she could no longer remain a bystander.  Barbers were forced to put away their razors, music shops were burnt to the ground, and girls’ schools blown up. It was against this backdrop that, in the spring of 2007, Mrs. Ahmedzeb set up three embroidery and handicrafts centers where destitute women could gather and work in peace.

“I had to create something … a place where we can talk, we can chat so we can forget our worries. So we started with embroideries. Rather than hear who has been slaughtered and who had been killed, they could get away from the trauma.”

Now in its third year, with more than 500 women in employment, her three centers train women, free of charge, and export the colorful and distinctively Swati embroidery in the form of dresses, cushion covers, napkins, and more to buyers in Pakistan’s metropolitan cities of Lahore and Islamabad, the capital. An art exhibit in Islamabad by Argentinean Mariano Akerman this week showcased some of the best designs.

The centers, which Ahmedzeb continues to fund with her own money, including buying the raw materials, are filled with chatter and laughter. Swati women, unlike men, have few opportunities to congregate. Here they share tips and exchange gossip while sitting on mats. Several bring their young children too.  Arifa, a young woman, says she lost her husband, the sole breadwinner for the family, to a roadside bomb.  The women typically earn $50 to $150 a month, depending how much they produce. Some, like teenager Sidra Bakthiad, is using her pay to save up for her college education.

“The women of the family are upholding their family name and are good social activists,” says Ziauddin Yusufzai, head of the private schools association of Swat, adding Ahmedzeb has a reputation of being a “very fine woman.” Residents here speak highly of acts of generosity, such as opening her ancestral home to fleeing refugees during a 2009 Army operation in Swat and financially supporting some 18 children of refugees.  The women at her centers are grateful for the opportunities they are getting. “We owe Mussarat Bibi a lot for the hope she’s given us,” says Sheema Bibi.