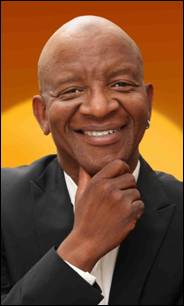 The Los Angeles Greyhound bus terminal was a noisy and sometimes dangerous place in the mid-1980s when Lebohang Morake arrived there at age 22. Morake, a South African who had been performing in nightclubs in his native country since he was a child, found himself among those experiencing homelessness, jostling to find a place to sleep at night. “I was a street beggar,” said Morake, who has since had a dramatic reversal of fortunes and is now a Grammy-winning musician known around the world as Lebo M.

Last month, Disney flew him to the Hollywood premiere of “The Lion King” and put him up at the Ritz Carlton. Paparazzi at the London debut snapped photos of the 55-year-old as he smiled next to Elton John and Beyoncé and shook hands with Prince Harry and Meghan, Duchess of Sussex.

It was the latest in a stunning string of successes for Lebo M, a producer and composer who won a Grammy Award for the song “Circle of Life” from “The Lion King,” and a singer whose memorable voice begins the opening scene in the film. He attributes his personal success to the same thing he thinks makes “The Lion King” story so resonant: With enough heart, even those who have been cast aside can triumph.

Lebo M was born in Soweto, South Africa, in 1964 during apartheid. When he was 9, Lebo M joined a youth recreational club that offered table tennis, ballroom dancing and music. “Music became my refuge from the streets,” he said.

He began singing jazz professionally and recorded his first single in 1977, when he was 14.Two years later, he followed a migration of young people to Lesotho, the independent country encircled by South Africa, to pursue a musical career. He had heard about a new nightclub opening up. Shortly after he arrived, he learned that he had been exiled, forbidden by the white South African regime to return to his family in Soweto.

One night, Lebo M performed before Lesotho’s ambassador to the United States, Tim Thahane, who noticed the teenager’s vocal talent. With Thahane’s help, Lebo M applied to the Duke Ellington School of the Arts in Washington and was soon accepted.

Once in the District, he was taken under the wing of Union Temple Baptist Church in Southeast. “Lebo M was so eager, so talented,” said the Rev. Mary L. Wilson, who remembers when the teenager first stepped into her church.

Wilson and her husband, the Rev. Willie F. Wilson, realized the youth had nowhere to sleep and invited him to stay in a spare bedroom at their house while he attended high school.

After graduating in 1983, Lebo M thought he had found his path to success. A music producer promised him an opportunity to record a single on the West Coast. Lebo M scraped together the money for a one-way ticket. After arriving in Los Angeles, the singer got into the producer’s car, he recalled, but it turned out to be a scam. After learning that the African refugee didn’t have any money, the producer dumped him by the side of the road.

Alone in a new place, Lebo M started living on the streets. For two-and-a-half years he was homeless, sometimes staying at a shelter and sometimes at the bus station. He took jobs to get back on his feet — at McDonald’s, as a parking attendant and a music intern — but he never stopped performing. On Thursdays and Fridays, he often showcased at Marla’s Memory Lane Jazz and Supper Club, the club owned by Marla Gibbs from ‘The Jeffersons.’ “That’s when I was slowly coming out of the streets,” he said.

Then, in a stroke of luck, he ran into a friend from childhood who was a bass player for South African singer and songwriter Johnny Clegg, who was in Los Angeles on a world tour. Lebo M met Clegg’s producer, who gave him a job at his recording studio. “I was the tea guy there, the runner,” said Lebo M. “When the studio wasn’t busy, I would do demos.”

Through the studio, in 1991, he met Hans Zimmer, who had created scores for the Oscar-winning movies. “Rain Man” and “Driving Miss Daisy,” and was working on “The Power of One,” a film set in South Africa. He and Zimmer hit it off, and they collaborated on the film. Lebo M ended up co-producing, co-writing and performing the soundtrack for the film with Zimmer. It was his breakout project.

The next year, Lebo M ended his 13-year exile and returned home as Nelson Mandela was poised to become South Africa’s first black president. In Los Angeles, Zimmer began working with Disney on an unnamed African animation project, and he wanted Lebo M for it. Zimmer tracked him down in Soweto, and they collaborated on the soundtrack for “The Lion King,” which was released in 1994. The movie made more than $900 million at the box office, becoming one of the most successful animated films of all time.

The opening of Lion King was magical. “It’s just an instant emotional, spiritual connecting moment in the creative process that acknowledges the presence of a king,” he said. That chant, a mixture of the South African languages Zulu and Xhosa, was done in a moment of inspiration as the studio session started. “We tried a million times, but we loved that first take,” Lebo M said.

Disney decided to translate the movie for the Broadway stage, and in 1996 brought in Lebo M to work on it. The stage production won five Tony awards and became the top-grossing musical in history, earning more than $8 billion. It has been seen by more than 100 million people in 19 countries.

For Lebo M, the story is personal. He sees “The Lion King” as not just his own story, but also that of other people who have experienced oppression. “I became a fan of the spiritual power of what ‘The Lion King’ represents,” he said. “It’s about an immigrant exile refugee who comes back home and triumphantly overcomes evil to be a long-lasting, positive legacy.”

Lebo M has been involved in the current reboot of the movie, including collaborating with Beyoncé and Zimmer for the scene with the song “Spirit” and joining Beyoncé at the film’s European premiere in London. “Lebo is my original inspiration,” Zimmer said about their joint effort in a news release from Walt Disney Studios.

Lebo M, who now lives in South Africa, has six children. He has racked up stacks of awards and enjoyed the spotlight with superstars. But he still holds tight to his past, saying he identifies as a “refugee and immigrant.” His grounding comes from a belief he has carried with him since his boyhood in South Africa, and those nights he slept at the bus station in Los Angeles. “I share inspiration that is based on a very simplistic approach,” he said. “The horror I’m facing today does not define my tomorrow.”